Warning: count(): Parameter must be an array or an object that implements Countable in /homepages/35/d89000786/htdocs/jessicafox/wordpress/wp-content/plugins/mooberry-book-manager/includes/plugin-functions.php on line 980
 Updates Archives - Jessica Fox

It’s been a whirlwind since Virtually Yours hit the virtual shelves…since April I had sinus surgery and started working on a huge project at my day job, along with quite a bit of travel to places like San Francisco and New York (again). I feel like suddenly I blinked and the summer was almost over! I feel like I’m still digging out of how crazy things got when I was recovering from my surgery, but I’m finally back on track in a way that feels good.

The good news is that with fall comes my next release…my original book baby, Drawn to Your Heart, is coming to ereaders and tablets near you this October! I’ll be putting out paperbacks as well for those who are interested in a hard copy. Seeing this book come to fruition is a long journey fulfilled for me, because even though Caroline and Drew hit the shelves first, Sam and Max is where it all started.

Truth be told, these books might have never happened at all if not for my good friend Sidney Bristol. We were having a writing day one weekend and something on TV made me think of the basic plot for Drawn to Your Heart. I joked about how someone should write it, and Sidney turned and gave me her patented “are you kidding me?” look and said, “ummm no, YOU should write it.” I hemmed and hawed until she basically said, “I dare you.” So I started writing it, and then suddenly I was in love with these characters and this world. One book turned into a plan for many books. And here we are.

My other good writing buddy, Kait Nolan, has helped keep me on track and sane while writing these books, too. Along with Sid, she’s my go-to sounding board and beta reader. Without them, hitting THE END would be a whole lot harder. As in my books, life is better because of the tribe you choose. It doesn’t hurt that I have a really understanding and encouraging husband, either.

I can’t wait for October, but in the meantime I’m putting the finishing touches on Drawn to Your Heart and getting things ready for distribution. It’s a lot of work, but I wouldn’t trade it for anything. If you want to stay updated on what’s happening as we draw closer to launch, don’t forget to add Drawn to your Goodreads lists and sign up for my newsletter!

Valentine’s Day has never, historically, been a favorite holiday of mine, thanks to unrequited loves and apathetic boyfriends in my younger years. But that changed when I was in my early 20s and decided to go to the SPCA and rescue a kitty on Valentine’s Day. I adopted my tortoiseshell calico cat, Caledonia (Callie for short), who has been my hell-raising Valentine ever since. She’s getting on in years, which is hard because I know we have limited time left together. But she’s still as spunky and chatty as ever, and I hope she stays that way. We just lost one of our other kitties (Crow T. Robotcat, the sweetest but dumbest cat to ever grace the Earth) last month, and I cannot fathom losing my first baby. I hope she’s my Valentine for a good while longer.

My other Valentine is my sweet, wonderful Mr. Fox, who really brings to mind the lyric, “each day is Valentine’s Day.” We don’t typically make a huge deal out of Valentine’s Day, since it’s sandwiched in between our the anniversary of our first date (January 1), my birthday, and our wedding anniversary (March 10). But we try to at least spend time together and have a nice date, which is super important since we’re both extremely busy. I don’t really know what I would do without that man—he is so supportive of my writing career and all my dreams in general. He is the type that romances me a little every day, in the most caring of ways. I am a big gesture romantic at heart, but it did me good to land a guy who infuses love into every small thing that he does for me. I appreciate so much more now that I understand that, and try to do it as much as I can in return.

On the writing front, this was a crazy week. Being back from sickness meant I had catching up to do at the day job, and this is our busy season. But I love what I do so much and feel extremely lucky to have the position I hold. My freelance writing is picking up too, with a plethora of jobs on the horizon over the next two weeks. That means that every word I can squeeze out on my fiction projects is doubly precious, and I may not be doing a lot of sleeping in the coming days. Today I am spending much of my Valentine’s Day on my WIP trying to reach The End. I hate being behind and I am so close that I can almost taste it. (The End tastes like chocolate and champagne, in case you were wondering.)

My goals for the next week:

There’s something so satisfying about seeing the target meter in Scrivener tick from yellow to green, hearing the ding of the system sound that indicates I’ve passed my session target for the day. After a January that didn’t go at ALL to plan, I’m trying to end the month strong as I look down the barrel to my author debut! Geeked Out is coming soon and I’m so excited to bring everyone into the world I’ve created.

So what happened this month? Let’s see…a business trip to Canada, a family emergency, my birthday, a new freelance journalism gig, and then I got sick as a dog. 2016, I am giving you some very suspicious side-eye right now. But I’m determined not to let the last 31 days get me down, because I have so much great stuff happening that it far outweighs the bad things that have happened lately.

Right now I’m finishing up Drew and Caroline’s story in Code Name: Girlfriend for the author box set it will be a part of in April. As soon as I’m done with that, I’m jumping right back into Sam and Max’s story in Drawn to Your Heart so that I can launch it alongside the box set. I can’t believe it’s already almost February, which means I have less than 60 days to get it all finished and launched! Cue a little bit of hyperventilation. Between my day job, my freelance, and this it’s going to be a tight squeeze, but I’m determined to make it happen. Once I get those two out the door, it’s time for Kate and Colin’s story in Holding Out For a Superhero.

I’m getting ready to go on another business-and-pleasure trip at the end of March, so I might not even be home when the books launch. That’s good, because by then I’ll be on my vacation days and I will be too busy seeing Hamilton and exploring New York City to agonize over the launch and refresh stats over and over in real-time. But I know I won’t be able to resist keeping one eye on everything in my author world even while I’m trying to have fun.

So I’m in fast-writing mode, as well as promo prep mode right now. The marketer in me can’t resist putting together a comprehensive plan for my books, as well as the box set since that’s one of my contributions to the group. It’s a daunting task, but I really enjoy figuring out which promo tactics I want to try first. There are so many great pieces of advice floating around the author world, so I’m just going with what makes sense to me as a pro marketer out of the gate, and I’ll tweak as I move forward. Yeah, I’m nerding out just a little bit.

I’ll leave you with a fun little excerpt from Girlfriend…it’s the moment our heroine Caroline meets the hero, Drew—only neither one of them knows it yet.

The sidewalks around the main square were bustling for a weekday afternoon, moms with strollers mixing with college kids on skateboards and everyone in between. But the line for Java Jones was thankfully short—the baristas were like a well-oiled machine, cranking out drinks for the caffeine-addled patrons in record time.

“Large Americano, extra shot of espresso, shot of caramel, double shot of chocolate, whipped cream.” She forked over the requisite change to the barista and moved toward the edge of the counter, already salivating at the thought of the sweet respite of caffeine and sugar.

“That’s a serious drink.” The voice behind her was amused and deep.

Caroline turned over her shoulder with a grin. “I’m a serious girl.”

The owner of the voice was kind of hot, if she was honest—tall, broad shoulders that filled out a pretty nice suit jacket, and gray eyes that smiled just as much as his lips.

“I can tell.” He said, flicking his eyes up to her riot of bright pink waves. “It was the extra shot of espresso that gave it away. You planning on sticking to the ceiling all afternoon, or will you come down for your next fix?”

She laughed. “I only wish it was enough to make that big of a difference. Honestly, I need something more like a direct IV of caffeine straight into my bloodstream if I’m going to make it through the week.” Her drink appeared on the counter, piping hot and smelling like a little piece of heaven. She grabbed it and took a long sip, only stopping to lick the thin film of foam and whipped cream from her top lip. “God, that’s good.”

Coffee Hottie’s eyes were dilated slightly in the dim light of the shop. “I wish I felt that strongly about my coffee.”

“Then you’re definitely ordering it wrong. Try it with a shot of the homemade caramel syrup. Makes the flavor rich and deep but not too sweet.” She raised her cup in a salute and took another sip. “You can thank me later.”

“I’ll remember that.” Coffee Hottie’s megawatt smile went straight to the pit of her stomach, warming it almost as much as the coffee. “Next time, your coffee’s on me.”

“What makes you think there’ll be a second date?” Caroline winked and shouldered her bag more securely. “I’m going to be late. See ya around, hotshot.”

My goals for the next couple of months are steep but exciting:

What goals do you have for your publication plan right now, fellow writers? Readers, what are you excited to see from your favorite writers?

Jessica Fox is a journalist by day and a romance writer by night, specializing in funny, sexy stories with a unique voice and memorable characters. 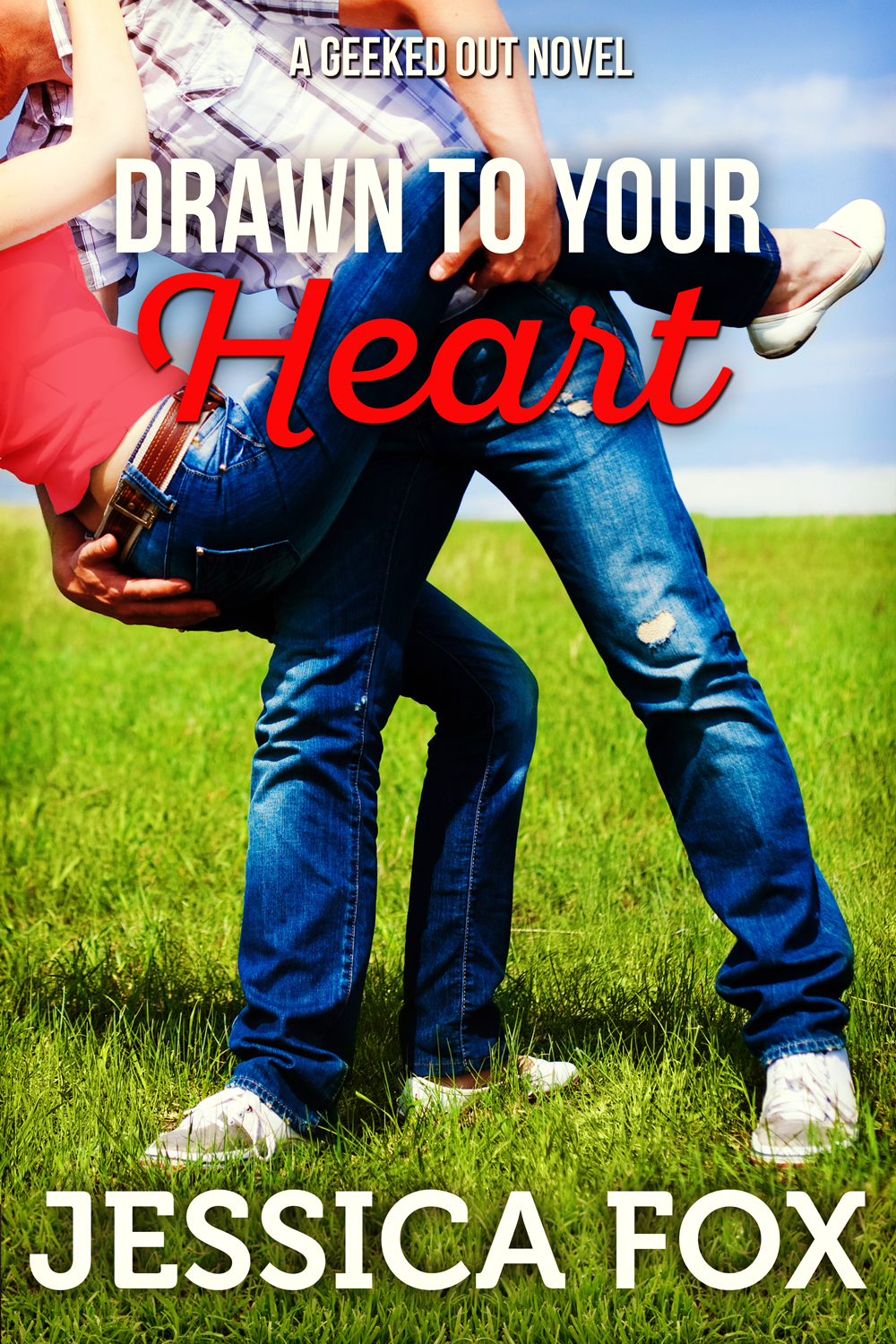